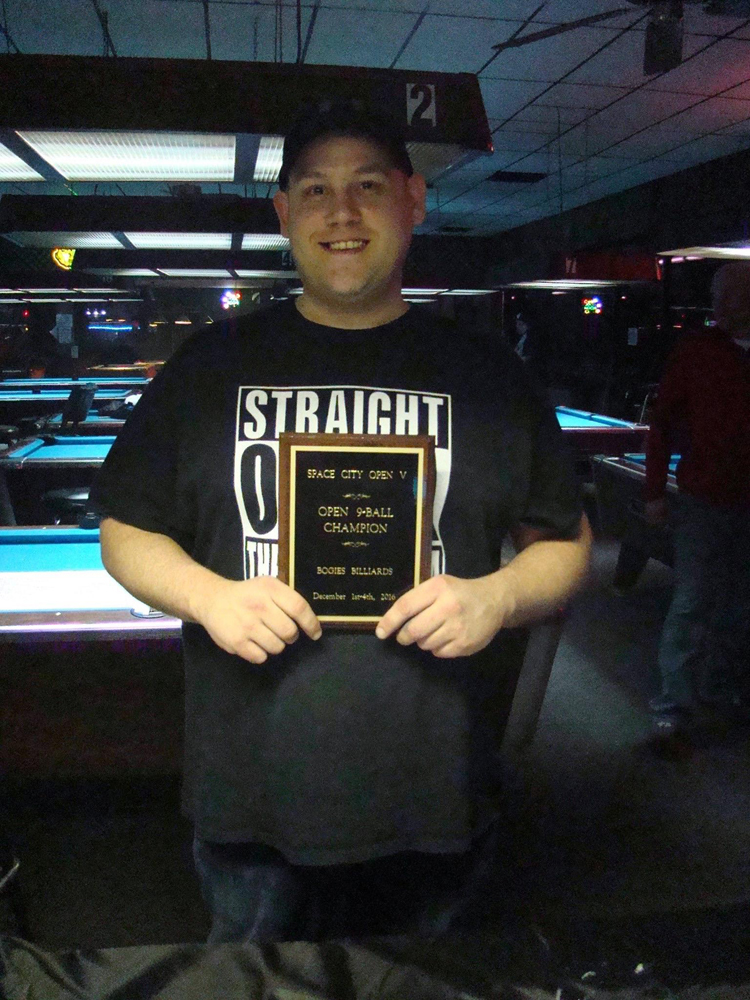 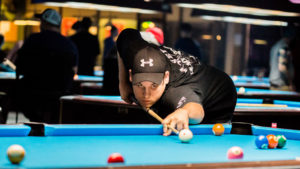 The 4-day, 4-division, $6,000 added Space City Open V (SCO) was held at Bogies Billiards and Sports Bar in Houston, Texas, December 1st-4th, 2016. In its fifth year, SCO continues to increase in talent and value, and professional players from across the U.S. flew in to take advantage of this annual event. This year’s line-up featured an all-star cast of phenomenal talent going head to head in a test of wills and stamina. New on the scene, Arizona’s Scott Frost and South Carolina’s Josh Roberts, along with resident players Jeremy “Double J” Jones (TX), Justin Hall (FL), Shane “Doomsday” McMinn (TN), Alex Calderone (FL), Sylver Ochoa (TX), Robb Saez (TN ), Manny Chau (Peru), Richie Richeson (MI), and many others, entertained a packed house and hundreds of at-home viewers who tuned in to the live stream provided by PoolActionTV.com. 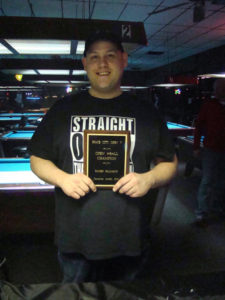 In the 87-player 9-ball field, McMinn took an early hit from Jeremy Jones in the fourth round, 9-4, but came back swinging. While McMinn made his way through the one-loss side, Alex Calderone was doing some damage of his own, taking down Ed Ambros, Tony Barrington, 9-8, and Josh Roberts, 9-6, to reach the winners’ side final four. Jeremy “Double J” Jones ousted Jason Klatt, Blaine Barcus, 9-1, McMinn, 9-4, and Justin Espinosa, 9-8, to reach Calderone. Manny Chau had an impressive run, defeating Scott Frost in the first round, 9-4, Jason Chance, 9-4, Ruben Bautista, 9-5, Ernesto Bayaua, 9-8, and Sylver Ochoa, 9-5. Playing out to meet Chau, Tommy Tokoph took down Lee Clark, 9-1, Bill Blanda, Kenneth Price, and Bob Eaton, 9-6. On the one-loss side, upsets included Jacob Watson with a stunning victory over Justin Hall, 7-4, and Bob “The Pittsburgh Kid” Guzik, eliminating Bautista, 7-6. Finding himself in unfamiliar territory, Frost secured five consecutive matches on the one-loss side, with wins over Klatt, 7-0, Sergio Rivas, 7-2, Blanda, 7-6, and Barrington, 7-3. Frost fell to Jethwa, 7-3, while McMinn took out Robb Saez, 7-6. Bayaua defeated Watson, and Joey Torres took out Kenneth Price, by the same score, 7-4. As the final eight took shape on the one-loss side, the winners’ side final four was on fire, with Calderone defeating Jones, 9-6, and Chau sliding by Tokoph, 9-8. Back on the west side, Roberts ousted Bayaua, 7-2, and Torres eliminated Espinosa, 7-6, while Ochoa overcame Jethwa, 7-5, and McMinn bested Eaton, 7-0. Roberts went on to win sets against Torres, 7-5, and Tokoph, 7-2, while McMinn took down Ochoa, 7-0, and Jones, 7-4. The hot seat match witnessed an undefeated Calderone make quick work of Chau, 9-4. McMinn dusted off Roberts, 7-6, then Chau, 7-1, for a shot at the title. Both Calderone and McMinn were hungry for their first Space City Open win, leading up to a battle for the finish line. The first set commenced, and it appeared to be anyone’s ball game. McMinn settled in, and pulled ahead to win the first set, 9-7. In overtime, there was little Calderone could do from the sidelines, as  McMinn had the break down cold, coasting to a 7-2 win over Calderone, and securing his first-ever, SCO 9-ball title. 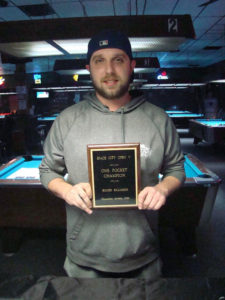 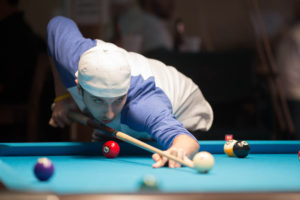 Former Mosconi Cup Player and Southern Classic all-around Champion, Justin Hall, went through the 32-player one pocket division like a hot knife through butter. Hall blazed through Sonny Bosshamer, 4-2, Jeremy Jones, 4-3, Marvin Diaz, 4-1, and Sylver Ochoa, 4-1, while Josh Roberts took out Scott Frost, 4-0, Aaron Springs, 4-0, Jason Chance, 4-1, and Richie Richeson, 4-0. On the one-loss side, Jones won an incredible five consecutive matches, besting Adam Cooper, 3-0, James Davis, Jr., Tommy Tokoph, 3-0, Chance, 3-1, and Ochoa, 3-2. Following a third round loss to Hall, 4-1, Diaz came back to defeat Jeff Sparks, 3-0, Sergio Rivas, and Richie Richeson, 3-2, to meet Jones. Back on the east side, after a long, drawn-out battle, Hall secured the hot seat, 4-3. Back on the one-loss side, in a surprising upset, Diaz defeated Jones, 3-0, to meet Roberts. Fresh off a hot seat loss, Roberts did what any champion would do, and that’s fight back. He made quick work of Diaz, 3-0, earning himself a rematch with Hall. In the final set, Hall was bit more subdued, but determined to not to let this one slip away. Once again, a seasoned Hall overcame Roberts in the first set, 4-2, going undefeated to win his second SCO one pocket title, becoming the only player to win two titles in this division. 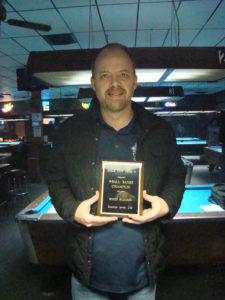 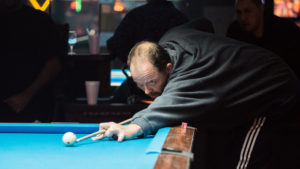 Kicking off Space City Open V was the 20-player, 9-ball banks division, witnessing former Mosconi Cup MVP and former U.S. Open Champion, Jeremy Jones, capture his third Space City Open banks title. It was a long row to hoe for Jones, as he took down a list of worthy competitors, including Chris Thompson, Jason Chance, 3-0, Anthony Shea, 3-0, and Denis Strickland, 3-2. Also making his way through the field, Manny Chau defeated Viet Do, 3-1, Gail Eaton, 3-0, and Norman Small, 3-0, to face Jones for the hot seat. On the one-loss side, after suffering a first round loss to Do, James Davis, Jr. came back to win six consecutive matches, eliminating Scott Frost, Jim McCarry, Richie Richeson, Aaron Springs, 3-0, and Strickland, 3-0. Sergio Rivas was dealt a first round loss by Strickland, and also came back to win sex consecutive matches, booking wins over C.J. Escalera, Do, 3-2, Shea, 3-1, Thompson, 3-0, and Small, 3-1. On the east side, Jones took the hot seat wheel, defeating Chau, 3-0.  Back on the west side, Davis ended Rivas, 3-0, but fell to Chau, 3-0. The rematch between Jones and Chau ended all-too quickly for Chau, as Jones pulled ahead, winning the first set, 3-1. Jones crushed it, losing a total of three games throughout the 9-ball banks event, defending his 2015 title, while securing his third SCO banks title. 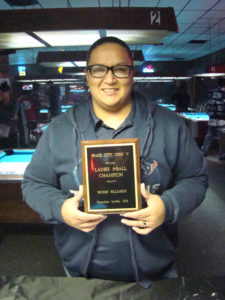 Wrapping up the event, 20 women battled it out on Sunday for over $2,200 in cash, in the ladies 9-ball division. Natalie Rocha came out firing, ousting Brandi Humber, 7-1, Gail Roles, 7-3, and Marie Clark, 7-3, while Ming Ng defeated Monica DeTuncq, 7-0, and Kim Pierce, 7-6. Ricki Casper made her way to the winners’ side final four with wins over Gail Eaton, 7-6, and Alicia Huff, 7-1, while Teresa Garland bested Lois Morgado, 7-3, and Nicole King, 7-6. Ng fell to Rocha, 7-3, and Casper defeated Garland, 7-4.  Rocha went on to secure the hot seat, over Casper, 7-4. On the one-loss side, Eaton dusted off Clark, 5-1, and Garland, 5-2, while Roles ousted DeTuncq, 5-4, only to be eliminated by Ng. Eaton ended  Ng, 5-4, but fell to Casper, 5-4. Casper earned herself a rematch with Rocha, and she intended to use it for all it was worth. As the first set commenced, the players fought relentlessly, each vying for their first Space City Open title. Rocha and Casper traded game for game, until Casper inched ahead to win the first set, 7-6. The second set was a different story, as Rocha came out of the gate running, and never slowed down. Rocha closed out the final set, 5-0, winning her first Space City Open 9-ball title. 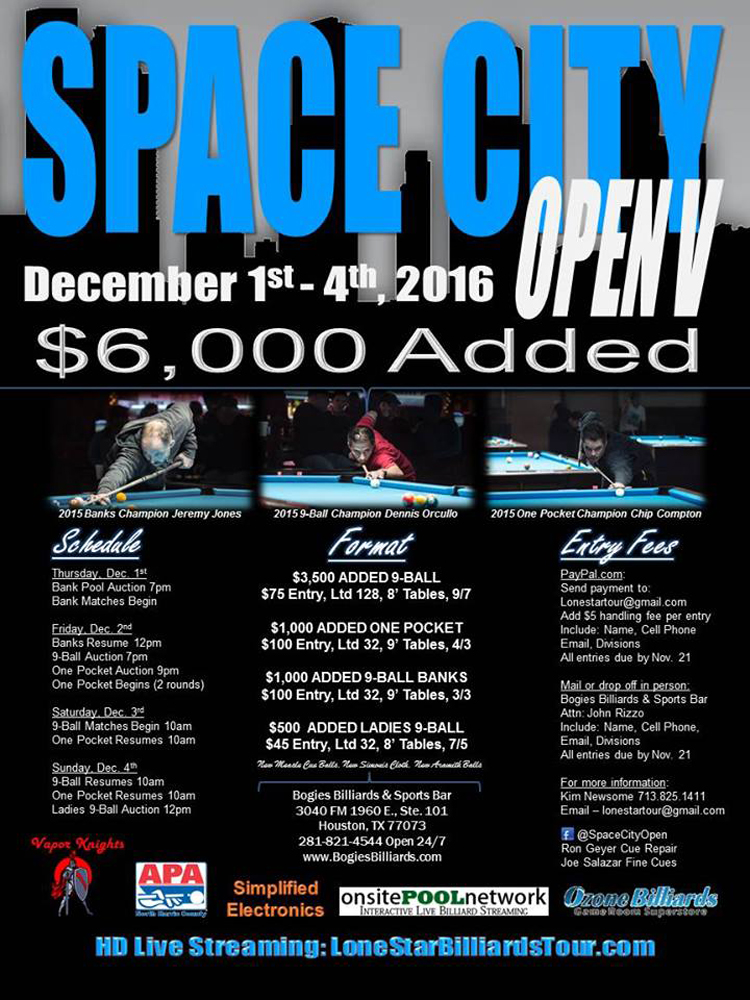